2022 offered up a concoction of negative factors for investors: Inflation was red hot and gradually weakened consumer confidence and spending, Russia’s invasion of Ukraine worsened inflation and sent energy prices even higher (not to mention set off a humanitarian crisis), and the U.S. Federal Reserve began its most aggressive interest rate hike cycle to try to bring inflation back down to normal levels.

While the Fed’s rate hikes have helped stoke fears of a recession for 2023, it has had an even more dramatic (but little-known) impact on investors in another important way: the sharp rise of the U.S. dollar’s value. However, after an incredible run-up in value, the dollar has begun to give back some of its gains in recent months. If the trend holds, this could be a huge tailwind for stocks in 2023. Here’s how.

The Fed’s interest rate hikes have done far more than throttle economic activity (a blunt instrument used to try to reduce inflation). Interest rates have a direct bearing on demand for a particular currency relative to other currencies. A higher interest rate can increase demand, as investors might be interested in holding “risk-free” cash and short-term debt instruments in dollars, versus a currency where interest rates might be lower. Additionally, the Fed also began lowering the supply of dollars changing hands in the economy last year (known as “quantitative tightening”). Lower supply plus higher demand launched the dollar on an epic run-up in 2022.

To illustrate what happened, take a look at the U.S. Dollar Index, as measured by the Invesco US Dollar Index Bullish Fund — which is designed to track the U.S. Dollar Index. This fund follows the value of the dollar versus a basket of other currencies (over half of the basket is euros, with the remainder a mix of the Japanese yen, British pound, Canadian dollar, Swedish krona, and Swiss franc). 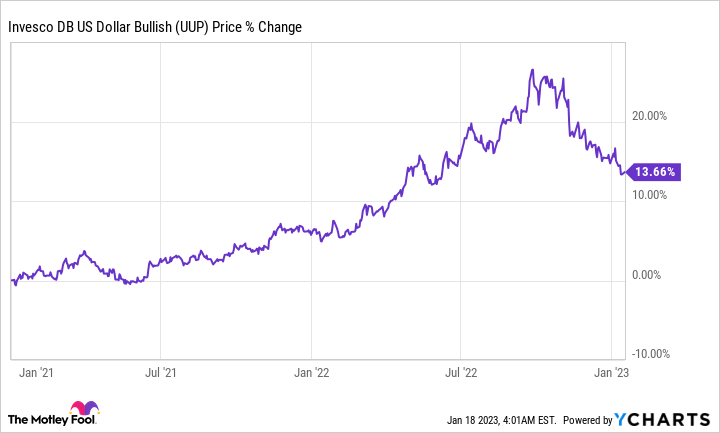 As you can see from the chart, the dollar’s value remained fairly muted in 2021. But as the Fed ratcheted up interest rates, the dollar soared, culminating in a nearly 20% year-over-year run-up at the end of October 2022. So what?

If you own shares of U.S.-based companies that do business outside of the states, a strong dollar isn’t exactly good news.

A strengthening dollar reduces the value of an international sale when the company converts that money back into dollars (since a higher dollar makes the value of the foreign currency worth less than it was before). So why make the currency conversion? To pay business expenses, satisfy Uncle Sam’s corporate tax demands, and to report financial results to investors.

The effect becomes even more pronounced when the reduced value of the revenue then has to be used to pay expenses in dollars. It’s a double whammy for U.S. companies, especially tech companies that pay out most of their expenses in dollars (to employees, for the purchase of equipment, and other expenses related to research and development and marketing).

Just two companies help illustrate King Dollar’s tyrannical rule in 2022: Microsoft (MSFT 2.58%) and Apple (AAPL -0.09%). During the three months ended in September 2022 (during the dollar’s peak, and Microsoft’s first quarter of fiscal year 2023), Microsoft said revenue increased 11% year over year. However, when backing out the effects of the dollar’s liftoff, revenue would have grown 16% year over year. That’s about a 30% reduction in total revenue growth thanks to the dollar lowering the value of international sales.

Microsoft’s operating profit margin got hit even harder. The company said operating profit increased just 6% year over year in Q1 fiscal 2023, or 15% growth when backing out the dollar’s value gains.

Apple had a similarly unpleasant time in the same quarter (for Apple, the fourth quarter of its fiscal year 2022). Revenue rose 8% year over year, but CFO Luca Maestri said growth would have been 14% when excluding exchange rates (a more than 40% reduction in sales growth) during the company’s quarterly earnings call. Corresponding earnings per share (EPS) increased just 4% in the quarter. Although Apple didn’t provide an exact figure on how the dollar lowered EPS, it most certainly was a major headwind.

As ugly as it was in 2022, an equally stunning reversal in the U.S. dollar has taken place in recent months. After peaking in late September/early October, the U.S. Dollar Index has backtracked in dramatic fashion. Other central banks have been increasing interest rates and are catching up with the Fed’s aggressive stance against inflation. Meanwhile, the central bankers here in the U.S. have been indicating they’ll increase rates far more gently during the first half of 2023 before pausing these hikes, which has added fuel to the dollar’s recent declines.

The dollar is still up a lot compared to where it was a year prior, so exchange rates will still negatively impact earnings for companies like Microsoft and Apple in Q4 of calendar year 2022 and well into calendar 2023. However, starting around mid-2023, what was once a big headwind could reverse and become a tailwind for U.S. companies. After all, the dollar cuts both ways. A falling value of the U.S. dollar serves to boost year-over-year revenue and profit growth for companies that sell their goods and services overseas.

It’s too soon to tell, but if the dollar’s current value holds — or better still, continues to fall — it could turn into a catalyst for stocks later this year and spur on a big rally. Stay tuned for more details.