As iconic a company as Intel (INTC -1.35%) is, the bear market and recent severe downturn in consumer spending on electronics (like PCs and laptops) have done a number on “chipzilla.” Shares of the company fell over 40% since the start of 2022. Revenue is in decline, which has dropped Intel to third place in largest chip companies by sales (the top spot is now held by Samsung, and Taiwan Semiconductor Manufacturing (TSM -1.20%) is in a close second place).

There’s hope Intel can make a comeback, especially as it retools its data center offerings and chips for consumer electronics. But it’s going to be an expensive and multiyear endeavor for Intel, which introduces risk for shareholders. If you want to bet on an Intel rebound in 2023 and beyond (as well as the advance of the chip industry overall), there could be a better stock to bet on: Synopsys (SNPS -1.30%). Here’s why.

Intel is a top spender on EDA software

Though it has fallen on hard times, Intel is still a huge player in the chip industry. Revenue is on track to be at least $63 billion for 2022, and the company shells out tens of billions of dollars on equipment and services. That’s where Synopsys comes in.

Synopsys is far and away the largest player in EDA (electronic design automation) software — a type of computer-aided design originally developed specifically for semiconductors. Think of it like Autodesk‘s (ADSK -1.00%) AutoCAD for chips. Synopsys, along with Cadence Design Systems (CDNS -0.30%) and Mentor (now part of German industrialist Siemens (SIEGY -1.58%)) dominate the EDA landscape. A handful of other companies like Ansys (ANSS -1.29%) also play in this sandbox but provide more specific tools than the general EDA programs Synopsys offers. 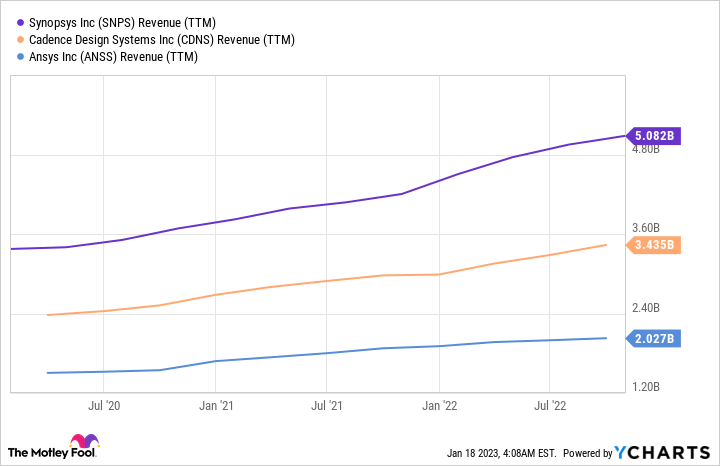 What’s this have to do with Intel? These days, Synopsys has hundreds of customers spanning not just semiconductor designers but also software developers looking to deeply integrate their engineering with the chips that will run the apps.

But in its recently filed annual report for fiscal year 2022, Synopsys revealed it still had one customer that made up more than 10% of its total revenue. Specifically, Synopsys said this customer and its subsidiaries made up 11.7% of total revenue in fiscal 2022, 10.6% in 2021, and 12.4% in 2020. This giant customer is widely believed to be Intel.

A play on Intel’s rally and advanced chip manufacturing too

Accounting for such a big chunk of Synopsys’ revenue, Intel’s future success has a lot of bearing on Synopsys’ fortunes as well. However, as Intel revamps its chip lineup and begins to aggressively expand its “Foundry Services” segment (manufacturing chips for other chip designers), Intel’s ultimate profitability is unknown at this point.

Meanwhile, Synopsys is already highly profitable but is making a concerted effort to expand those margins in the coming years. (For reference, peer Cadence already boasts operating margins of over 30%, so Synopsys has a lot of room for improvement.) 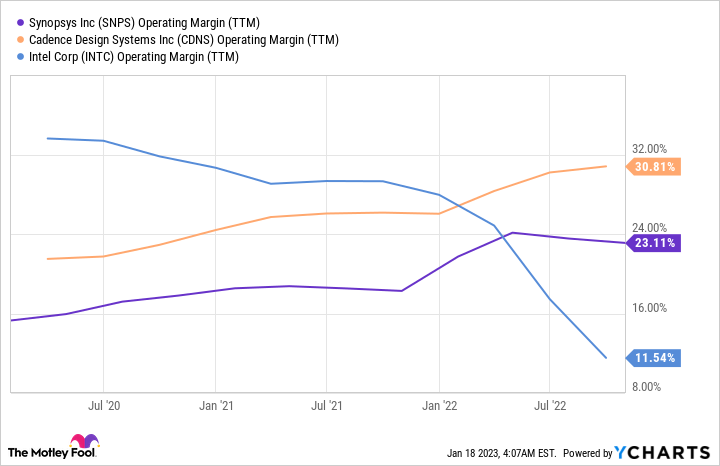 Intel’s future profitability becomes an even bigger question when considering it is in a sort of chip fab arms race with Taiwan Semi as both try to build new manufacturing plants in key geographies like the U.S., Japan, and Europe. Competition is good for fabless chip designers that will use services from Intel and Taiwan Semi, and it’s good for ultimate consumers of the chips (and the devices they power), but it could mean compressed profit margins for Intel and Taiwan Semi as they duke it out for supremacy.

Notably, Synopsys counts chip manufacturers as customers, too, including Taiwan Semi, Samsung, and Intel, as they try to develop the most advanced chipmaking capabilities (currently 3-nanometer and smaller chips).

In other words, Synopsys can be a top way to profit no matter how the semiconductor landscape ultimately shakes out. However, Synopsys could scoop up some of the most profitable revenue streams from the industry as chipmakers ramp up new designs and manufacturing technology. Of course, stable and highly profitable software-based revenue comes at a premium. Synopsys trades for about 32 times trailing-12-month free cash flow as of this writing.

Nevertheless, with Intel facing significant uncertainty in 2023, Synopsys could be a far better purchase that still yields some exposure to Intel’s business. My tip of the hat goes to Synopsys, though I plan on dollar-cost averaging into a larger position over time, given the premium price tag.